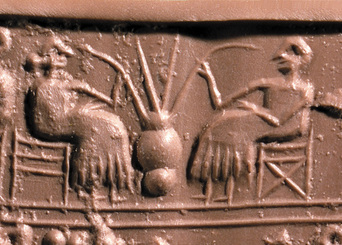 Modern brewers replicate Sumerian beer
Great Lakes Brewing Company, based in Cleveland, Ohio, is going back to its roots—way, way back, some 5,000 years to the earliest recordings of brewing from Sumer, the first civilization in Mesopotamia. With the help of archaeologists from the University of Chicago, the company has replicated a Sumerian recipe using only tools that would have been available in the fourth millennium B.C.E.—ceramic vessels and wooden spoons. While beer is mentioned in Sumerian texts from 3200 B.C.E., the recipe and instructions used by Great Lakes Brewing are based on the Hymn to Ninkasi (c. 1800 B.C.E.), a song dedicated to Ninkasi, the Sumerian patron goddess of beer.

Hometown, ...Cleveland, Ohio.
Despite being flavored with spices, the Sumerian brew created by Great Lakes is very sour. While the company plans to sweeten future batches with honey or dates, it still might be too acidic for the modern palate. Interested in trying it? Although Great Lakes does not intend to sell the Sumerian beer, they are planning to feature it at events this summer in Cleveland and Chicago.

Learn more about how Great Lakes Brewing crafted their Sumerian beer.
The Vicarage